I love volunteering. I don’t have very many hobbies, but if I had to state one it would be volunteering. When I first came to Missoula as a freshmen at the University of Montana, I was a little lost. Not only was I lost because of the confusing Missoula roads, but also with my own self-purpose. Somewhere near the end of freshmen year an acquaintance recruited me to volunteer for an afternoon at Habitat for Humanity.

Something that afternoon clicked. I loved it, I was happy, and I was hooked.

However, I knew Habitat for Humanity wasn’t exactly for me, and so began a year-long journey of “testing out” many different organizations. Then, as if it were fate, my schedule allowed me to attend advocate training at YWCA Missoula. As they say, the rest is history.

By the end of July, I will have served two AmeriCorps terms at the YWCA. The first term focused on providing direct services to women fleeing domestic and sexual violence situations by filling response, FirstStep (sexual assault response) and shelter check-in shifts. I am currently serving the second term as the assistant volunteer coordinator for Pathways, and I have been working side by side with the volunteer coordinator over the last six months. I am very thankful for my experiences at the YWCA because I have learned so much here during the last two years. However, it is now time to move forward.

This spring, I completed my bachelor’s degree in sociology at UM. Along with my degree, I graduated with a nonprofit administration minor and became a nationally Certified Nonprofit Professional. Because of the above accomplishments and experience, I was accepted into Indiana University Bloomington’s School of Public and Environmental Affairs (SPEA) to pursue a master’s degree in Public Affairs with a focus on Nonprofit Management. According to U.S. News & World Report’s Best Graduate Schools, SPEA is ranked as the second best Public Affairs graduate program in the nation, with the nonprofit management program ranking first of its kind. Over 600 individuals applied to attend the program and only 125 were selected this year, which explains why I shed tears of joy when I found out I received my acceptance letter. The icing on this spectacular cake is that I have also been awarded a pretty fantastic fellowship that continues to allow me to work within a nonprofit setting while I attend school. 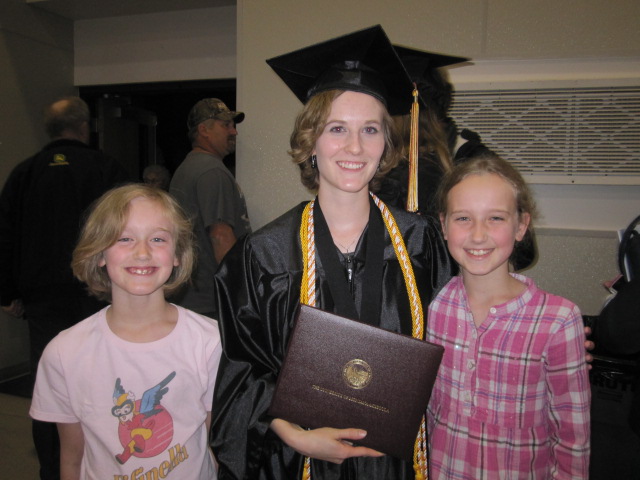 YWCA AmeriCorps Volunteer Emily graduated from the University of Montana this spring with a degree in sociology.

I am positive that my acceptance into SPEA was heavily influenced by the time I spent at the YWCA. I am very thankful to the YWCA because they gave me the chance, and often times the freedom, to combine what I love doing with amazing learning opportunities. These opportunities allowed me to get to know some of the most amazing and capable women and men in Missoula. Even though I am leaving, I am taking with me many fond memories and the inspiration to continue to help others.